Our Areas of Expertise

Play Video
CONNECT WITH US

At bci, we focus on teaching leaders and protégés about how to attract, build and maintain sponsorship relationships across cultural differences, where authenticity and inclusion are essential.

Sponsorship is Critical for the Advancement of Women and Diverse Professionals

Research conducted by the Center for Talent Innovation (CTI) reveals that sponsorship is a powerful relationship that occurs when a “sponsor” (senior leader) does a minimum of three things for their “protégé” (junior team member): goes out on a limb for them, advocates for their next promotion and provides air cover when they make a mistake.

Research also tells us that sponsorship is critical for catapulting the careers of women and diverse professionals, but only if it is done in an inclusive way.

At bci, we’re passionate about inclusive sponsorship training. In 2017, along with CTI, Ritu co-authored the ground-breaking research report, Sponsor Effect: Canada, which examines the sponsorship experiences of people of color, Indigenous peoples and women, including intersectionality.

The research tells us that there is a sharp divide in the kinds of support white people, people of color and Indigenous peoples receive from senior colleagues. A few key findings from this report include:

Very few Canadian people of color, Indigenous peoples or women have sponsors, despite being highly ambitious and willing to “go the extra mile” at work

Many think leadership attributes are defined by white male standards, and people of color and Indigenous peoples are more likely than white people to hold this perception

Why Our Clients Choose Us for Our Inclusive Sponsorship Training​

The difference between mentorship and sponsorship and why this matters

The key responsibilities and behaviors for sponsors and protégés

We Help Organizations to Build a Culture of Sponsorship

Sponsorship is critical for creating an organizational culture that supports the advancement of women and diverse professionals and that is rooted in values of allyship, anti-oppression and anti-racism.

Sponsorship is a win-win for sponsors and protégés.

It’s a win for sponsors because they build a team of “go-to” people they can rely on who are loyal, who are reliable and who make the leader look good. And it’s a win for protégés because sponsors unlock career advancement in offering their advocacy and support.

By opening up doors, advocating for promotions and providing air cover when mistakes happen, leaders help protégés to build their profiles, access opportunities and so much more. Sponsorship relationships are everything.

Sponsor Effect: Canada is a cutting-edge research report on how race/ethnoculture, gender and the intersection of cultural identities impact sponsor relationships in Canadian workplaces.

This pioneering research — the first of its kind in Canada — delves into issues around inclusive sponsorship and the challenges faced by people of color, Indigenous peoples and women (and the intersection of identities) in attracting advocacy. 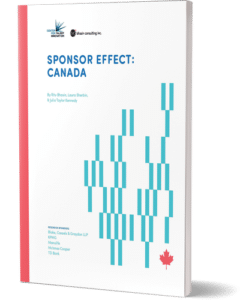 Find out more about our inclusive sponsorship e-learning module, which teaches emerging leaders about the key skills that are necessary to attract and maintain strong sponsor relationships.

This website uses cookies to improve your experience while you navigate through the website. Out of these cookies, the cookies that are categorized as necessary are stored on your browser as they are essential for the working of basic functionalities of the website. We also use third-party cookies that help us analyze and understand how you use this website. These cookies will be stored in your browser only with your consent. You also have the option to opt-out of these cookies. But opting out of some of these cookies may have an effect on your browsing experience.
Necessary Always Enabled
Necessary cookies are absolutely essential for the website to function properly. This category only includes cookies that ensures basic functionalities and security features of the website. These cookies do not store any personal information.
Non-necessary
Any cookies that may not be particularly necessary for the website to function and is used specifically to collect user personal data via analytics, ads, other embedded contents are termed as non-necessary cookies. It is mandatory to procure user consent prior to running these cookies on your website.
SAVE & ACCEPT

We'd Love to Hear from You!